For two days in a row I’ve felt like I wasn’t making enough milk through the late night – early morning. The night before I had been up chain nursing Jaxon until my boobs were dry and he.kept.demanding.MORE. Up until then, I had been a milk makin’ machine so maybe I ate something or didn’t eat enough of something that affected my milk.

At any rate, I pulled out the Mother’s Milk tea and decided to try it. It tasted so bad. OMG. I don’t like black licorice o_O. Just don’t. It took some getting used to, but the tea is not that bad. I gulp it down anyway.

Some of you were wondering if I noticed an increase in milk production since drinking the tea… two days, two almost engorged boobs, and a happy baby later… 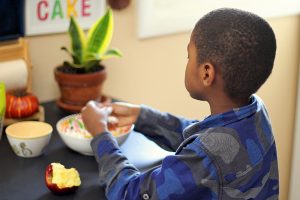