To celebrate the release, I was blessed to travel to Miami to attend a Rio 2 screening, courtesy of 20th Century Fox.

Rio 2 is the story of Blu and Jewell and their now suburban family. They have three little ones who don’t know how to live in the wild anymore, and are always plugged in to electronics! What is a parent to do?

I attended an amazing Samba Party with the cast of Rio 2, and got to see live performances by some of the musicians, including the fabulous Janelle Monae! She performed my favorite song from Rio 2, “What Is Love“.

The next day, I got to interview some cast members, and had a word with Ms. Janelle Monae herself! Sophistishe: How was working on a kid centric project different from the other stuff you’ve done, since this is your first kid’s project? Ms. Janelle Monae: Right. Well, no, I’m a kid at heart. If you listen to my music, my storytelling, I never want to get rid of my childlike essence, because it keeps me creative. It allows me to have fun and laughter and release those endorphins that just help you stay young for the rest of your life, right? And I have a niece and a nephew as well, and when I know they love my music, I go to them before I complete an album. If they’re in the car jamming, it’s right. If they’re not, I need to go back in. 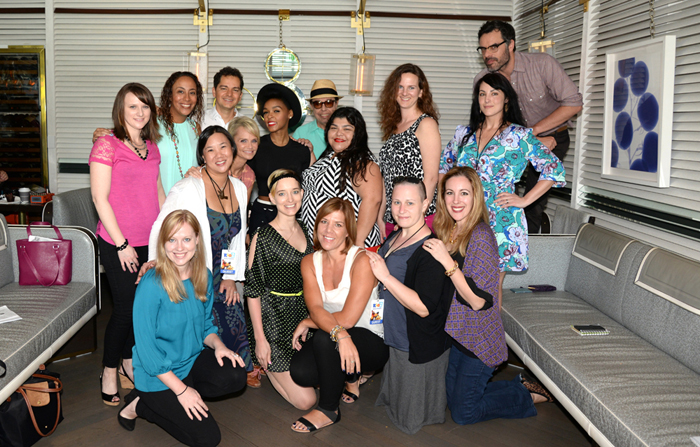 I already think Janelle Monae is a musical genius, but it made me love her more to see that she was such a kid at heart. She spent the whole night after her Samba Party performance cheering on tiny dancers on the floor!

The Samba Party, interview, (and subsequent rejuvenation) took place at the Fontainebleau hotel, an amazing property on the U.S. National Register of Historic Places. It was an extremely happening place to be, as the lobby turned into a hot nightclub after hours. Seriously!

I had a great time eating Dim Sum at Hakkasan with Savvy Sassy Moms, Lady and the Blog, Tech Savvy Mama, Honest and Truly, Modern Mom, and Sassy Mama in LA! We were having such a good time, the waiter assumed it was a bachelorette party! (Note to self: consider Hakkasan in Fontainebleau hotel for future bachelorette party location).

I definitely want to return to Miami, it was a fantastic break from the stubborn winter that just won’t let go!

Giveaway ends 4/16/14 12AM CST. Open to US mailing addresses only.
a Rafflecopter giveaway

Candice "CanCan" Kilpatrick is a native of the American South and a rolling stone. Her mosaic of life experiences includes 10 years as an expat in Asia, a role in an indie film, a Masters degree in teaching, a stint as a promo model, and lots of Perfect Timing and serendipity. She lives in Brooklyn, works in Social Media, and is the lucky mom to two boys.