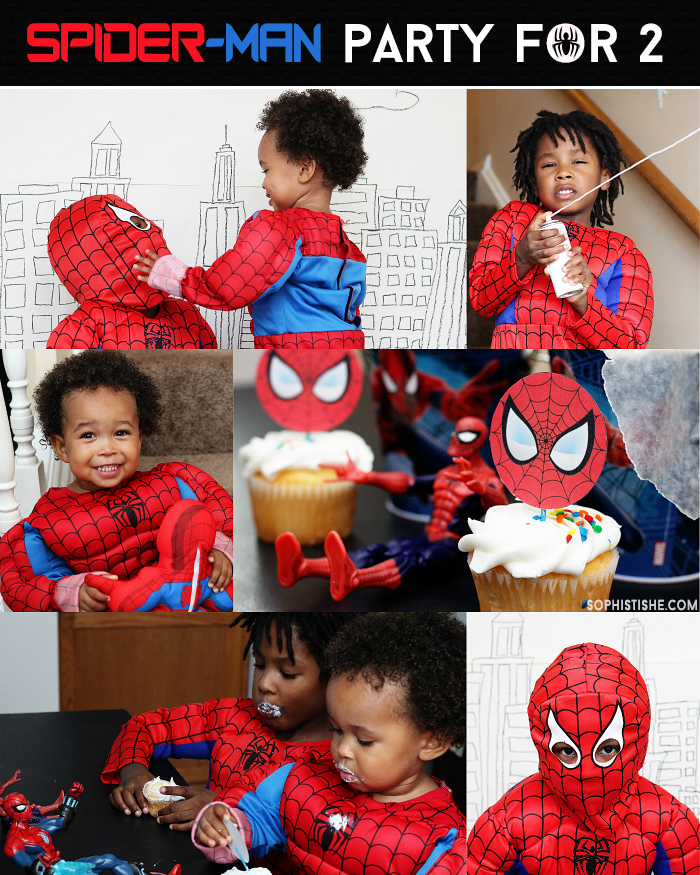 We are huge Spider-Man fans and to celebrate the release of the  Amazing Spiderman 2 movie Blu-ray Combo, we had a Spider-Man party for two! Planning this party was oh so very simple. Being Spider-Man enthusiasts, we already had plenty of toys and costume options. Jayden was Spider-Man for two Halloweens so both of the boys each had costumes to wear.

So with toys and costumes already taken care of, I just had to do a quick run to Walmart for cupcakes and some simple, yet fun party essentials. No party is ever complete without cupcakes, so I grabbed some from the bakery because ain’t nobody got time for baking right now, LOL. Next stop was the party aisle. I had high hopes for red and blue balloons, but would you believe there were absolutely no red or blue balloons? Folks must be partying HARD! Hahaha! So I skipped out on balloons and grabbed some silly string because what’s a Spider-Man party without Spidey webs? I also found some great Spider-Man 2 themed party pails.

To set the scene, Daddy created a cityscape backdrop. We taped two long sheets of drawing paper together and Daddy quickly whipped up a scene for us. The boys transformed into miniature Spideys and posed for playful photos. Jayden got some web action in and Jaxon chilled out with his Spider-Man plush.

With the boys occupied, I popped some popcorn on the stove top and filled the  party pails with their favorite snack. I prepped the cupcakes with picks I created using free sticker printables I found at Great Kids Birthday Parties.

Both of the boys tore into their cupcakes. Jaxon devoured his cupcake and finished big brother’s. After cupcakes, Jaxon’s costume went in the wash and munching on popcorn concluded “Spider-Man time”.

The Amazing Spider-Man 2 at Walmart

Enter the Be a Hero Contest

In conjunction with the new Spider-Man Blu-ray combo release, Walmart is hosting the “Be a Hero Contest” where students can enter to win a school visit from Spider-Man, along with school supplies and books!

Here are the rules:
-Entrants must create a video posted on YouTube that explains why their school is “amazing.”
-Entrants must tweet a live link to the video with #BeAHeroContest.
-Information and rules at Walmart.com/Spiderman
-Contest ends 9/14
-5 Grand Prize Winners will win: Spider-Man visit to your school, $1000 in Scholastic books, year supply of Elmer’s glue sticks, year supply of Crayola Crayons
-250 First Prize Winners will win: Spider-Man recorded PA announcement, Scholastic books, 10 Elmer’s glue sticks, 10 packages of Crayola Crayons

As a participant in the Walmart Moms Program, I’ve received compensation for my time and efforts in creating this post. All thoughts and opinions are my own.

One Love: An Interview with Cedella Marley

A Farewell to Winter / Savoring the Final Days